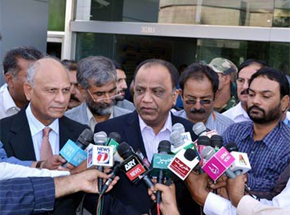 KARACHI: Minister for Ports and Shipping Senator Babar Khan Ghauri said here on Saturday that the World Bank funding of Rs9 billion for reconstruction of six berths at the Karachi Port is a strong indicator that vibrant institutions, such as KPT, are not on the negative list of world financial institutions.

He said most of the institutions, run by the Ministry of Ports and Shipping, including Pakistan Shipping Corporation (PNSC), KPT and Port Qasim, are making huge profits and are actively contributing to economic growth.

Speaking at the ground-breaking ceremony for the project of reconstruction of berths 15 to 17A, including ship repair berths, 1 and 2, where the prime minister was the chief guest, the minister said that these institutions have made huge profit of Rs18 billion in the last financial year.

He further said that if people work hard, all growth targets could be achieved.

Such achievements, the minister said, are a ray of hope for the nation, particularly when huge national institutions, like Pakistan International Airlines, Pakistan Steel and Railways, etc., are not only incurring huge losses but are also on the verge of collapse.

He disclosed that the Ministry of Ports and Shipping had constructed a civic centre at Gwadar port and hoped that Prime Minister Yousuf Raza Gilani would inaugurate it next month.

Aslam Hayat said that the KPT is well aware of its social obligation towards city and recently purchased two passenger boats for commuters between Karachi and Manora at a cost of $2.345 million each.

Similarly, he said KPT plans to construct Karachi Harbour Crossing bridge, which will ease tariff congestion in the city by providing connectivity with Northern Bypass and Lyari Expressway via Manora and a cargo village is also being constructed at an estimated cost of $600 million for which financing has been sought from Asian Development Bank.

The KPT, he said, also plans to develop recreational facilities at Oyster Rock breakwater for citizens of Karachi.

© 2012 A Shakoor & Bros. All rights reserved Developed By Aekpani Networks